Sri Lanka is Still in the State of War: Slow Motion Ethnic Cleansing

For many of us, 2009 seems like it was decades ago. While 2009 boasts of various historical artifacts like President Obama’s inauguration, everything-Sarah-Palin, and Michael Jackson’s death there is one event of the year that should not- ever- be dismissed as an artifact of its time and deserves further scrutiny. For over 25 years, thousands of Tamils in Sri Lanka were met with hardship, suffering, and strife as a brutal Civil War ruthlessly turned the notion on its head. In May of 2009, the Sri Lankan military claimed its victory at the expense of tens of thousands (hundreds upon hundreds) of innocent lives lost. And while many consider the year the government claimed its victory, the end of the war, nothing could be farther from the truth.

Many would think that Sri Lanka has returned to a state of normalcy. That the war, indeed, should be an artifact of the past. After all, it has been a decade since the brutal fighting has stopped, and now people should finally be free to live in peace and harmony, right?

Wrong. Sri Lanka is far from rainbows and sunshine. In fact, the harsh reality that few are willing to accept is that Tamils on the island are still entrapped in a state of war.

The threat and ominous possibility of state oppression against Tamils continues to grow in Sri Lanka because of the lack of accountability and transitional justice measures that took place to rebuild society, post-civil war.  But while no accountability and no justice prolonged the hostile social build of the country, it wasn’t what birthed the state of war.

Simone de Beauvoir, a French political activist, and writer, once said “All oppression creates a state of war”. The Sri Lankan state is no exception.  The government’s oppressive nature was reinforced throughout time, and over the years- with absolutely no accountability or international scrutiny- the government orchestrated systemic oppression in the island- creating a hostile and discriminatory environment against Tamils. Heightened oppressive state structures against Tamils were, and are currently, crafted by the oppressive Sri Lankan regimes to sustain the state of war. In particular, there are three main oppressive state structures that are currently being masterminded to sustain the state of war in Sri Lanka: 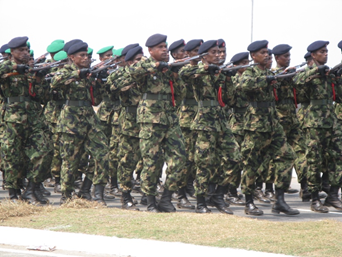 Although the war ended in 2009, the Sri Lankan government continues to oppress Tamil citizens through military surveillance. According to the  Adayaalam Center for Policy at Jaffna University did a study study, 25% of Sri Lanka’s military occupies the Mullaitivu district with the ratio of – 1 soldier per 2 civilians in the area.

Government task forces, and other irrigation and development schemes were created and currently used as pretext to state sponsored colonization and deliberate re-engineering of the demographics of the region. The Seruwila area in Trincomalee is a prime example of this as the Tamil speaking population there is now reduced to just 31% now as Sihalese settlement development increases. Reengineering the Tamil demography is orchestrated with an intent to destroy the Tamil identity, political voice of the Tamil people, and its existence.

President Rajapaksa has set up two task forces in early June. One was composed entirely to Sinhalese military officials to assure a ‘disciplined, virtuous and lawful society’ without defining any of those ideals specifically. The second task force is composed almost entirely of military officers along with some Sinhalese scholars to study and preserve archeological treasures in the East, where the majority of the population is Tamil and Muslim. While on the surface level, both these task forces seem somewhat reasonable on paper, the practices that will be exerted by these task forces are malicious and done so with the sole intent of keeping marginalized Tamil and Muslim communities oppressed.

Each of these structures emphasize that what we’re currently seeing now is a slow-motion form of ethnic violence- one that is unleashed on Tamils to ethnically wipeout their identity, political voice, and freedom of expression. In various promises to the international community in 2009, Sri Lanka vowed to never allow civil unrest and violence from happening again. And while these promises at the time gave a glimpse of  hope to Tamils worldwide, the continuation of these structures is nevertheless happening right in front of the international communities’ eyes. International bodies must acknowledge that oppressive state structures are being masterminded by Sri Lanka’s governing regime to sustain the state of war against marginalized Tamil people and slow-roll the ethnic cleansing against Tamils without being noticed by the concerned international body. Dismissing conflict in Sri Lanka as an artifact of the past downplays the urgency of the situation there and delays an international acknowledgement and response for its current state of war.

Tamil people in Sri Lanka still have hope for the international community to act with urgency to free them from the current state of war and bring a permanent political solution to the island nation. It’s up to us to deliver that hope.